In Pain? Need To Be Seen Right Away? We Are Winnipeg's Walk-In Chiropractor!

Dr. Richie Cabigting was born and raised in the Garden Grove area of Northwest Winnipeg. He attended Garden Grove Elementary School, Sisler High School and the University of Manitoba where he earned a General Bachelors of Science Degree. 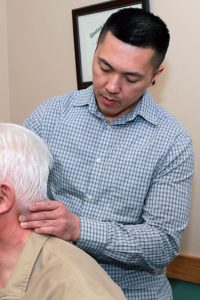 He then spent over ten years living and working in the US as a chiropractor before he moved back home to Winnipeg. Starting February 2018, he became the owner of the well-established Garden City Chiropractic after Dr. Wray Johnson retired. Dr. Richie then turned it into RC Walk-In Chiropractic and has now expanded to 3 locations!

Dr. Cabigting is proud to deliver excellent chiropractic care to the community where he grew up. He has big dreams, visions, and goals of helping promote the chiropractic profession. He believes in the collaboration of chiropractors with the patient’s medical doctors, physiotherapists, massage therapists and other health care professionals to be the best way to help the patient.

He brings with him over 15 years of experience, valuable lessons and a passion for helping as many people as he can in his practice. He is energetic, compassionate and detail-oriented.

(Chiropractic Xray Available. Other Medical Xray available in the near future)

- Services Provided by Dr. Richie Cabigting Chiropractic Corporation
Websites by Creative Pixel Media
Disclaimer: The Team at RC Walk-In Chiro asks that you please be aware that individual results for any treatment or use of our products may vary. Results are not guaranteed. This website is provided for information and educational purposes only. No doctor/patient relationship is established by your use of this site. No diagnosis or treatment is being provided. The information contained here should be used in consultation with a medically licensed and trained professional of your choice. No guarantees or warranties are made regarding any of the information contained within this website. This website is not intended to offer specific medical, health, wellness, or relaxation advice to anyone.
MENU